A group of Egyptian anarchists held the "First Conference of the Egyptian Libertarian Socialist Movement" in Cairo, on October 7. Dozens of anarchists and other socialists were in attendance, along with a number of students and activists. 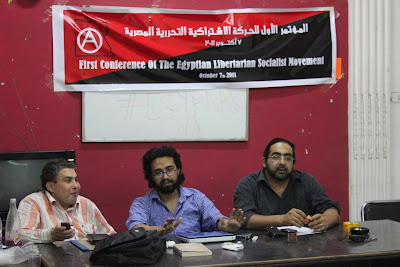 This first conference was intended to be an introductory get-together. Panelists spoke of anarchist theory, history and practice. Experiments in workers' self-management in Egypt, and direct democracy were discussed.

Panelists also spoke of developments among grass-roots civil society organizations - such as 'Popular Committees' and independent trade unions - which have been established since the January 25th Revolution. 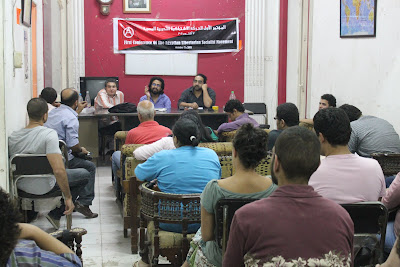 Further conferences are planned for the near future. More workers, students, and farmers are to be invited - as speakers and attendees. The upcoming conferences aim at coordinating efforts/struggles amongst activists in Cairo, Alexandria and other Egyptian cities.

Although it is not yet a movement in Egypt, these conferences aim at creating the popular basis for a libertarian socialist/anarchist movement in the country.
Posted by Jano Charbel at 4:00 PM