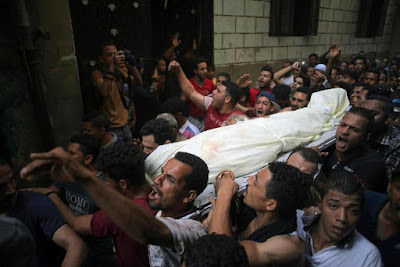 Egyptian authorities say police have fired tear gas to disperse a rock-pelting crowd of residents on a River Nile island in Cairo, clashes that left one person killed and 50 others injured.


CAIRO (AP) — Egyptian police on Sunday fired tear gas to disperse a rock-pelting crowd of residents defending their homes on a Nile River island against bulldozers sent by the government to demolish their illegally-built dwellings. The clashes left one person dead and 50 others injured.


The violence on the island of el-Waraq on the southern fringes of Cairo is likely to stain a nationwide campaign launched this summer by Abdel-Fattah el-Sissi, Egypt's general-turned-president, to restore government control over state-owned land.


El-Sissi has vowed in televised comments to show no lenience to anyone taking illegal advantage of state-owned property, saying the law would prevail regardless of how powerful or wealthy the offenders were. Anyone using land that does not rightfully belong to them, he angrily said, is a "common thief."


Illegal use of state land is widespread in Egypt, as well as building on agrarian land in violation of the law. Since el-Sissi launched his campaign earlier in the summer, local media has been showing images of police and army troops demolishing buildings illegally built or operating without a license, attempting to project an image of a government keen on protecting what is being billed as "people's property."


To el-Waraq's middle class and poor residents, however, the sight of bulldozers coming to demolish their homes may have been more than they could bear at a time when they, like most Egyptians, are struggling to cope with soaring prices for food and services, a result of ambitious reforms introduced by el-Sissi's government to revive the country's battered economy.


"Get lost! Get lost!" the protesters shouted at the scores of policemen who descended on the island early Sunday, backed by bulldozers, scores of riot policemen and led by senior police generals. The protesters, mostly young males, succeeded in forcing the bulldozers to turn away, but clashes soon began.


The Health Ministry said a resident died and another 19 were wounded in the clashes. It did not say how the man, Sayed el-Tafshan, died, but a photo of his body posted on social media networks showed chest wounds compatible with birdshot.


The Interior Ministry, which controls the police, said its forces only used tear gas.


A ministry statement said a total of 31 people — policemen as well as contractors who arrived with them on the island — were injured in the clashes. The injured policemen included two generals.

Ten residents were arrested for their part in the violence, it added.


Video clips posted on social media networks showed hundreds of angry islanders, mostly young men, at the man's funeral, marching through farm fields while chanting "We will sacrifice the martyr with our soul and blood."


The statement said the residents attacked police with firearms, birdshot guns and rocks, and that police responded with tear gas. It said up to 700 building and land violations were recorded on the island. It acknowledged the death of one islander and that 19 others were injured.


In el-Waraq, a mostly agricultural island with shoddily built apartment blocks, residents maintain that their homes are legal, citing the government's supply of drinking water and electricity.


One of the Nile's largest islands in Egypt, it is home to nearly 200,000 people and is linked to the mainland by six ferries.


"How is my home illegal when you have for years provided me with water and electricity," said resident and civil servant Mahmoud Essawi. "It's our land and we are not leaving."


In a separate development, Egypt's military said its jet fighters destroyed 15 all-terrain vehicles carrying weapons and explosives along with "criminal elements" after they were detected getting ready to cross the Libyan border into Egypt.


A military statement Sunday said the warplanes monitored and "dealt" with the vehicles over the past 24 hours, but it did not say whether the airstrikes targeted them while on Egyptian soil. It also did not mention Libya by name, making only a thinly veiled reference to the North African nation.

Posted by Jano Charbel at 1:39 PM No comments:

Officials in Egypt continue to detain and send ethnic Uyghur students to China.

Radio Free Asia (RFA) reports the students were studying at Al-Azhar Islamic University in Cairo.
RFA and VOA are each part of the United States government-supported Broadcasting Board of Governors.

Uyghurs are a mostly Muslim ethnic group in China and Central Asia. Most live in the Xinjiang Uyghur Autonomous Region of western China.

RFA reported in May that Chinese officials had begun ordering Uyghurs studying outside of China to return to their hometowns.

A Uyghur student at Al-Azhar told RFA at the time that classmates who had returned to China seem to have disappeared.

“We haven’t been able to contact any of them,” the student said.

More than 200 Uyghurs, many of them religious students, have been detained in Egypt since July 4. Some were seized in restaurants or at their homes. Others were stopped at airports while trying to flee to safer countries, sources told RFA.

The Middle East Monitor reported that as many as 80 Uyghur students may have been seized on Wednesday. They were arrested for alleged problems with their Egyptian residency papers, the Monitor said in its report.

Criticism of China's treatment of Uyghurs

Human rights and Uyghur exile groups have condemned China for violating the rights of the Uyghurs and for breaking a United Nations treaty.

Sandra Jolley is with the United States Commission on International Religious Freedoms. She told RFA that the Egyptian government’s actions violate international rules against torture.

Such rules protect people who may face “imprisonment, torture and death should they be deported to their homes,” Jolley said.

She and others are urging the Grand Imam at Cairo’s Al-Azhar Islamic University to help stop the forced repatriations of Uyghurs.

“He has a powerful voice. He leads Al-Azhar, and he should accept some role in protecting the students who attend this very prestigious university,” Jolley said.

A group of Uyghur students living in Cairo have also appealed to El-Tayeb. In a letter, they asked him to prevent future deportations.

“Our only sin is that we want to learn and study religion,” the students said.

The Arabic-language news service HuffPost Arabi received a copy of the letter.

Last week, Al-Azhar said in a statement that no Uyghur students had been arrested on the university’s grounds or while in any buildings connected with the school.
Posted by Jano Charbel at 1:17 PM No comments: