Security forces raided and closed what they described as the “atheists’ café” in the Abdeen neighborhood of downtown Cairo, municipal authorities announced Sunday.

The café has also been described as a den for “Satan worshippers.”

The closure spurred a reaction on social networking sites, with “atheists’ café” trending nationwide.
The mainstream media portal Sada al-Balad reported on Sunday that the coffee shop was raided and demolished.

Gamal Mohie, chief of the Abdeen Municipality, told Mada Masr that the coffee shop in question was not raided on Sunday, but one month earlier, on November 10.

“There was no demolition involved, only confiscation of the coffee shop’s property. This was all done in accordance with the law and legal procedures,” Mohie clarified, adding that the only person arrested during the raid was the owner, “as his coffee shop was unauthorized, unlicensed, and also because drugs were found inside.”

The café had originally been licensed as an import/export and trade office, Mohie explained, adding, “There was no sign reading ‘atheists’ café’ outside, as nobody would put up such a public announcement. However, it was popularly known as a place for Satan worship, rituals and dances. There were also Satanic drawings at the entrance.”

The municipal official said the “atheists’ café” was located at 61 Falaky Street in downtown Cairo. He added that it was raided last month, “following noise complaints from local residents. It was later shuttered and sealed off with red wax.”

In response to the news published in the Sada al-Balad portal, social networking sites were flooded with satirical comments regarding the actions of the authorities against perceived atheism.

One Twitter user commented that in light of this incident, “authorities might storm the Café of Vampires very soon.”

Another Twitter user sarcastically commented, “Religion has been introduced to Falaky Street during the reign of Abdel Fattah al-Sisi.” Another wrote, “The ruling regime has proven to be a bunch of comedians … Even funnier than the Brotherhood.”

Scores of other users criticized the effectiveness of closing coffee shops as part of the state’s attempt to eliminate the phenomenon of atheism in Egypt.

On Wednesday, religious authorities — citing an alleged survey — announced that Egypt has a total of 866 atheists, a figure which has widely been dismissed as baseless.

Some religious authorities announced outreach programs to eradicate atheism nationwide. This year, Muslim and Christian clerics, alongside police forces, have established committees and launched campaigns to rid the country of atheism.

Being an atheist is not criminalized by Egyptian law, although Article 98(f) of the Penal Code stipulates that individuals found guilty by a court of law of defaming, insulting or ridiculing the heavenly (Abrahamic) religions are to be issued prison sentences ranging from six months to five years, and/or fines of LE500 to 1,000.

Posted by Jano Charbel at 2:30 AM No comments:

Ahmed Douma was found to have “insulted the court” after he accused the judge of making anti-opposition comments on Facebook.

One of the more prominent young democracy activists in Egypt, Ahmed Douma, was sentenced to three years in jail on Tuesday for contempt of court, multiple outlets have reported.

Douma, an activist aligned with Egypt’s secular and liberal democracy movement, was jailed for “insulting the court” after he accused Judge Mohamed Nagy Shehata of bias against the opposition.

He questioned whether the judge was using a Facebook account to denounce opposition members, a popular theory among activists on social media.
The judge reportedly denied having an account, saying only people like Douma and “his friends” use the site, according to the English-language site Ahram Online.

The judge then found Douma to be in contempt of court, imposing the jail sentence and fining him almost $1,400. Douma responded by shouting, “Down, down, military rule!” from his court-room cage, according to Reuters. 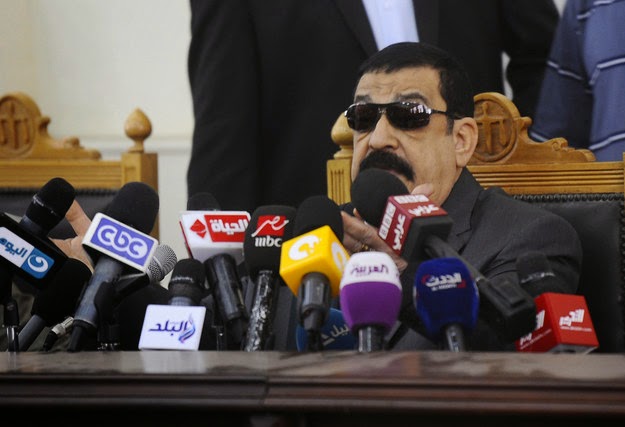 Douma had been on trial with more than 260 other defendants, accused of attacking a government building in December 2011.

He was a leading figure in the 2011 uprising that toppled former leader Hosni Mubarak, but also took part in later demonstrations against Islamist President Mohamed Morsi, as well as the current role played by the military in Egypt.

In June, Judge Mohamed Nagy Shehata also presided over the notorious trial in which three Al Jazeera journalists – an Australian, a Canadian, and an Egyptian – were jailed from seven to 10 years – on evidence widely denounced as ridiculous – for supposedly supporting the Muslim Brotherhood.

Last week, Shehata sentenced 188 defendants to death for an alleged attack on a police station in 2013.

Posted by Jano Charbel at 2:00 AM No comments: 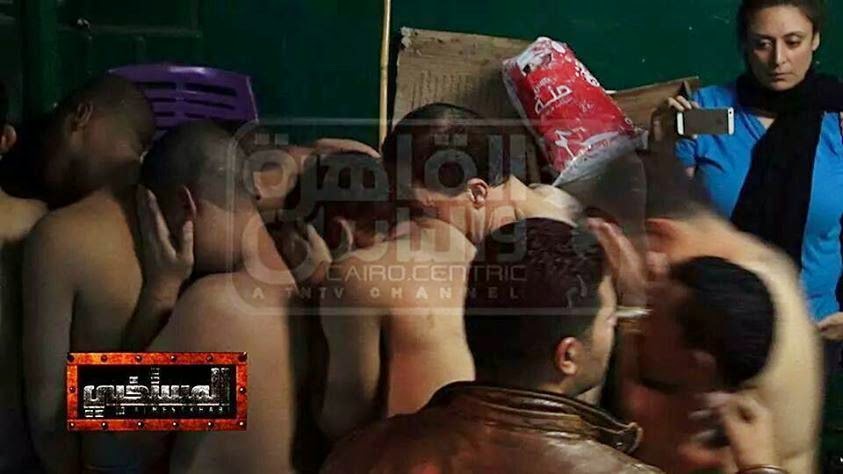 Dozens of men were arrested on "perversion" charges in a bathhouse in downtown Cairo’s Ramses area on Sunday, according to broadcast journalist Mona Iraqi, who filmed the security raid.

Iraqi, a presenter on “Al-Mestakhabi” (The Hidden), an investigative journalism show that broadcasts on the privately owned channel Al-Qahera wal Nas, wrote on her Facebook page that she and her team had been investigating the bathhouse, alleging it was a “den of illegal gay sex workers.”

“Today is one of Al-Mestakhabi’s good days — we have to share with you a new and big victory for the program. Al-Mestakhabi managed to shut down a den of group sex for men, and they were all arrested red-handed,” she wrote.

“Success is great and achieving goals are greater,” she added.

Iraqi also posted photos showing dozens of almost-naked men being arrested in the public bathhouse, which she alleged was a popular site for both Egyptian and foreign gay men. She further accused the 60-year-old manager of running a sex ring.

Al-Mestakhabi reporters secretly infiltrated the bathhouse and filmed what Iraqi described as “gay sex parties,” as well as the owner’s “confessions.”

The owner of the bathhouse had kicked Iraqi and her team out of his establishment before security forces conducted the raid.

The first episode on the investigation was to be aired next week, but Iraqi claimed the broadcast would be postponed “to give police forces the chance to raid the bathhouse and arrest those involved.”

Homosexuality is not a crime according to the Egyptian Penal Code, and furthermore, Iraqi did not prove any prostitution had occurred in the bathhouse, rights activist Sherif Azer wrote in response to Iraqi’s post.

Responding to the attacks, Iraqi claimed that the investigation was part of her program’s work on social groups that are most vulnerable to AIDS, as International AIDS Awareness Day was December 1.

“In case of public indecency, it has to be done in public. Is the bathhouse a public place? What are the accusations you presented to the prosecution so that they are arrested? If they [the detained men] are really patients of AIDS, they should be treated as patients not criminals and given proper medical support even if it is contagious. Do you accept seeing one of your family members who has a serious disease to be arrested naked by police?” Azer continued.

Others questioned Iraqi’s ethics and journalistic reputation given her cooperation with the police.

“The airing of the two-episodes investigation was adjourned for human, ethical and security reasons, and all the incident’s inside affairs shall be aired in a third episode. We did our work with the highest levels of professionalism and accuracy, and we urge the public not to judge the episodes positively or negatively before watching them,” Iraqi defended herself in a statement released on Monday.

But internet commentators continued to castigate the journalist, accusing her of heedlessly destroying the reputation of the arrested men — whose faces appeared in the photos she posted on her Facebook page — in her pursuit of fame.

US-based rights activist Scott Long blogged about the incident in his blog, the Paper Bird, and suggested the possibility of a government-sponsored campaign against gay rights.

“What’s clear is that another pro-Sisi media organ is working in close collusion with security forces, to produce a sensational show about sex with appalling and terrifying images, to invade privacy and engorge the prisons and destroy innocent people’s lives,” he wrote.

Long highlighted another recent incident in which eight men appearing in a video that allegedly portrayed a gay marriage ceremony were sentenced to three years in prison on charges of perversion.

“This message about ‘networks’ is a menacing constant. Egypt’s powers-that-be treat homosexuality and gender dissidence as political, and — like any kind of politics under an ever more constricting dictatorship — conspiratorial and sinister,” Long added.

Posted by Jano Charbel at 1:00 AM No comments:

Court Condemns 188 Defendants for Police Station Attack
Posted by Jano Charbel at 12:30 AM No comments: