Al-Masry Al-Youm
A year in review: The labor battle continues 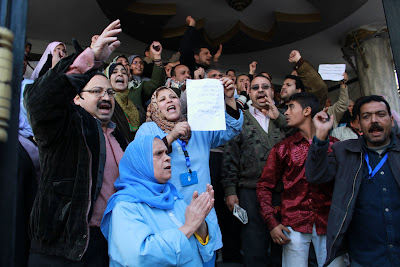 The success of the 25 January uprising in toppling Hosni Mubarak was made possible by industrial actions in key sectors of the Egyptian economy, not exclusively by the popular occupations of Tahrir and other city squares. Starting on 7 February, a public transport strike across Greater Cairo, coupled with labor protests along the Suez Canal — along with other industrial actions across the country — helped bring down Mubarak on 11 February.

The revolution has given birth to the first independent trade union federation in Egypt's history. It has also spurred authorities into dissolving the board of the state-controlled Egyptian Trade Union Federation (ETUF,) which had monopolized the union movement — by law — since 1957.

The revolution has also led to the drafting — but not issuing — of a new trade union law guaranteeing union freedoms and organizational plurality. Moreover, Egypt has moved towards the re-nationalization of companies privatized during Mubarak's 30-year rule.

Yet 2011 was also marred by numerous violations of workers' rights. According to Karam Saber, Director of the Land Center for Human Rights, "The greatest setbacks to Egypt's labor and union movements this year" include: the issuing of a new law criminalizing strikes, the forceful dispersal of strikes by hired thugs and security forces, and the referral of striking workers to military tribunals.

Saber added, "Other setbacks include: the ruling authorities' failure to issue the new trade union legislation, and as a result, the non-recognition of independent unions. There are also neglected labor rights, unpaid bonuses, mass lay-offs, factory closures, and lockouts."

In Saber's opinion, "The crowning achievements of the 25 January revolution have been the establishment of the Egyptian Federation of Independent Trade Unions (EFITU,) along with the formation of farmers' federations and unions." Working-class organizations on this level did not exist prior to the revolution.

Established on the fifth day of the revolution, the EFITU now has an estimated membership of more than 1.6 million workers, employees, and pensioners. Well over 100 independent unions, syndicates and professional associations have emerged since the revolution.

Furthermore, thousands of unionized workers have quit the state-controlled ETUF and have established independent unions. They include Cairo's public bus drivers, fare collectors, engineers and employees, who established the Independent Union of Public Transport Authority Workers in March.

The EFITU and other independent unions have played a significant role in leading this year's strikes and industrial actions. 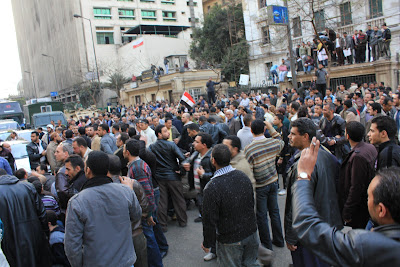 Egypt witnessed the largest number of industrial actions in its history with the strike wave of 2011, or at least the largest since the massive 2007-2008 strike wave.

Statistics are still being compiled, yet they indicate that several hundred strikes — well over 200 — have been reported throughout the country, along with thousands of labor protests, marches, hunger-strikes, occupations, sit-ins and sleep-ins.

According to Barakat, the common demands behind most of this labor unrest are: improved wages, payment of overdue bonuses, safer working conditions, full-time contracts for full-time work, along with a fixed monthly minimum wage of LE1,200 (around $US215) and afixed maximum wage for management.

Rather than the minimum wage of LE1,200 that workers have been demanding, the Ministry of Manpower and Ministry of Finance agreed to set the monthly minimum wage at LE700 (around $US125). This minimum wage is due to come into effect as of the beginning of 2012, yet may not be enforced.A maximum wage for management has not been determined.

"Throughout the revolution, Egyptian and foreign media coverage has focused on Tahrir Square, political parties, and parliamentary elections, rather than issues pertaining to working-class struggles," said Barakat. "Such being the case, numerous strikes and labor protests were either not covered, or did not receive the coverage they deserve."

Industrial actions were reported in numerous industries throughout the public, private and informal sectors of the economy. Amongst the largest and most significant strikes were: the Public Transport Authority workers' strikes of February and September/October, the strike at Mahalla's Misr Textile Company in February, the doctors' general strikes in May, and the teachers' mass strike in September.

Even police forces, for whom strike action is strictly prohibited, went on strike in Cairo and other cities in February, and again in October. The Interior Ministry was partially burned during the October strike, and policemen's salaries were reportedly raised by 200 percent.

In an unprecedented move, the interim cabinet in April issued a law criminalizing strikes and protests that "harm the national economy." The law was officially enacted in June, but has scarcely been enforced.

The law stipulates that protesters and strikers disrupting work may be punished by penalties of fines and/or imprisoned, with fines ranging from LE30,000 to LE500,000 (about US$5,000 to US$83,000), and prison sentences of one year or more. The law is meant to be enforced only during the course of the national transitional phase.

According to Barakat, "Security forces have cracked down on numerous protests, strikes and marches; hundreds of workers have been temporarily arrested or detained. However, few have actually been prosecuted or sentenced."

Following one such crackdown, on 29 June, a military court sentenced five workers to one year in prison for protesting at the Ministry of Petroleum. However, the court suspended these sentences. An unknown number of other workers have been detained pending prosecutors' investigations.

Numerous legal cases have been brought before the judiciary prior to and since the revolution — for an adequate monthly minimum wage, for the dissolution of the state-controlled ETUF, for the re-nationalization of Egyptian companies, and for the repeal of the law criminalizing strikes.

According to Wael Habib, a member of the ETUF care-taker council, "Egypt's workers are struggling to reclaim their rights and freedoms through the courts and through strikes and protests." Habib, a textile worker and labor activist, added, "We have won many gains, including the dissolution of the federation (ETUF's) executive council, and 12 of its general unions" out of 23 such unions.

ETUF elections were scheduled for November 2011, but have been postponed until May 2012, so as not to overlap with parliamentary elections.

Habib added, Trade Union "Law 35/1976 has been scrapped, and a new law has been drafted, but there has been a lot of foot-dragging on the part of the authorities." He went on to say: "Workers are using all legitimate channels available to them" in order to reclaim their companies and unions from Mubarak's men, who remain entrenched in the public and private sector companies."

The labor activist pointed out that "the combating of union corruption and administrative corruption, along with the setting of a new minimum wage and maximum wage, will be determined based on unions' ability to engage in collective bargaining with employers and the state."

Another legal victory for workers is manifested in the fact that five companies privatized over the course of the past decade are in the process of being re-nationalized via court verdicts. On 21 September, the Administrative Court nullified the privatization contracts for three companies upon finding that they were illegally privatized, having been sold to investors for less than their real market value.

The court ruled that the Indorama Shebin Textile Company, the Tanta Flax and Oils Company, and the Nasr Company for Steam Boilers are to be returned to the public sector. The privatization contracts of two other companies — the Omar Effendi department stores, and the Nile Cotton Ginning Company — were similarly annulled by administrative court rulings in May and December, respectively.

According to Gamal Othman, a worker-activist at the Tanta Flax and Oils Company, "Our company, and our rights as workers, have been raped by the Saudi investor who bought this company." Othman pointed out that upon its privatization in 2005, the company employed some 2,300 workers on ten production lines, but that "now we're only 300 workers operating only two production lines."

Although the Administrative Court ruled for the annulment of this company's privatization contract, the verdict is being appealed on 4 January. According to Othman, "The Ministry of Investment and other governmental authorities are appealing against this verdict because they claim that they want to protect investors' rights, and that they don't want to scare investors away from Egypt. We also want to protect investors' rights — but not if this means that the investor is allowed to violate the rights of workers and the rights of Egyptian state."

Othman concluded: "The corrupt practices of the old regime must not tolerated in the new Egypt."

LABOR UNREST IN THE MEDIA

According to media reports, state-owned and private enterprises have incurred hundreds of millions of pounds worth of lossesdue to strike actions. Transport strikes and blocked roads have inconvenienced commuters, while such industrial actions have reportedly caused the Cairo Stock Exchange to lose billions in stock values,

New terms have even been introduced to the Egyptian media's lingo in the coverage of labor unrest, terms that did not exist prior to 2011. These include ta'ateel 'agalet al-intag (halting the wheel of production) and fe'awiya (sectoral/industry-based) to describe labor protests and their demands — as distinct from revolutionary demands.

Mustafa Bassiouny, labor journalist for the independent Al-Tahrir Newspaper, said, "Strikes have scared away tourists. Strikes have harmed the stock market and the national economy. They are selfish and detrimental acts, and strikers' demands are not revolutionary demands. This is all that the mainstream media would have us think."

Bassiouny added, "The reality of the situation is that workers' strikes and protests are, and will always be, an integral part of the 25 January revolution. It was the strikes and protests that, in the last week of the uprising, actually toppled Mubarak. The chief slogan of this revolution is 'bread, freedom and social justice', and this is precisely what workers seek to achieve through their struggles."
Posted by Jano Charbel at 8:51 PM

“Benjamin Briel Lee was very professional at all times, keeping me aware of everything that was happening, If I had any questions he was always available to answer. This was my first home purchase, I didn’t know much about the loan process, he made it very easy to understand the things I had questions about. I really enjoyed working with him.”
He's a loan officer working with a group of investor's who are willing to fund any project or loan you any amount with a very low interest.Contact Benjamin Briel Lee E-Mail: 247officedept@gmail.com  Whats-App Number: +1-989-394-3740.