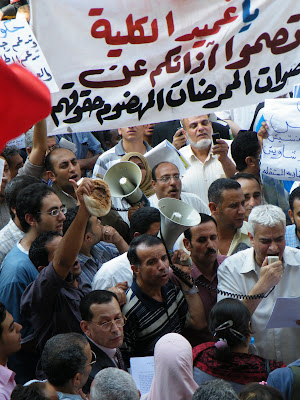 This year has been marked by numerous incidents of labor unrest, raising questions as to how Egypt’s ruling regime plans to contain such unrest ahead of upcoming presidential elections slated for late 2011.

"From 2006 to 2010, the most important factors behind all incidents of labor unrest have been the absence of adequate wages--especially in light of rising living expenses--and the non-existence of an independent trade union structure," said Kamal Abbas, director of the independent Center for Trade Union and Workers Services.

The Egyptian Center for Economic and Social Rights, meanwhile, an independent NGO devoted to labor issues, has been at the forefront of the legal struggle for a new national minimum wage. Although administrative courts have issued two rulings this year--on 30 March and 26 October--in favor of a new minimum wage, judicial authorities appear to lack the authority to specify exactly what this wage should be.

Labor rights groups are still calculating the exact number of labor-related incidents this year, but estimates suggest that well over 600 strikes, protests and sit-ins took place throughout the course of 2010.

Beyond strikes, sit-ins and street protests, other recorded incidents of labor unrest included a handful of hunger strikes and boss-nappings, along with the occasional blocking-off of roads and highways by disgruntled workers.

In May, over a thousand workers that had been conducting sleep-in protests outside of Egypt’s parliament, Shura Council (consultative house of parliament) and Council of Ministers were assaulted, threatened with arrest, and forcibly dispersed by police.

Since then, sleep-in protests have been banned outside these state institutions. Although workers' demands were largely socio-economic, some labor activists see the crackdown as part of a wider campaign against all opposition voices ahead of this year’s recently concluded parliamentary polls and next year’s presidential elections.

In late August, eight workers employed at the Helwan Factory for Engineering Industries, a state-owned military production plant, were put on trial before a military tribunal for protesting hazardous working conditions. The protests had followed a string of industrial explosions at the installation that killed one worker and several others.

The protesting workers were ultimately acquitted, but the affair represented the first time since 1952 that workers were tried before a military tribunal. Amnesty International condemned the trial, recommending that the Egyptian State apply sweeping reforms to protect workers’ rights.

Such signs of repression are seen by some analysts as reflecting a reduced tolerance for labor strikes on the part of the state. It remains uncertain, meanwhile, whether this tolerance will continue to wane in 2011.

The recent postponement of Egypt’s labor union elections to 2012--they had originally been scheduled for next year--suggests an attempt to garner labor support for President Hosni Mubarak in upcoming presidential elections, say analysts.

Abbas, for his part, criticized the state-controlled Egyptian Trade Union Federation (ETUF) for its role in attempting to postpone the union elections. "The ETUF is anticipating a parliamentary vote to amend Trade Union Law 35/1976, in order to allow for elections to be held every six years," he said.

Abbas believes that the incoming parliament, which is almost entirely in the hands of Mubarak’s ruling National Democratic Party (NDP), will approve the amendment. "Trade union elections used to be conducted every three years,” he said. “This was changed to once every four years, then five, and now they're aiming for six years.”

“This will serve to decrease the accountability of union officials, but this is what the ETUF wants,” Abbas added. “And this also seems to serve the interests of the ruling regime."

According to Karam Saber, director of the Cairo-based Land Center for Human Rights, the slightly decreased number of labor strikes in 2010 is hardly reflective of a declining labor movement.

"The recently concluded parliamentary polls drew media attention away from the labor scene," he said. "Numerous cases of labor unrest may have gone unreported as a result."

One of the largest strikes to have been seen this year is a countrywide truck drivers' strike that began on 10 December involving some 70,000 truck owners and drivers. The strike has affected the supply of essential products--from cement and steel, to grains and sugar--across Egypt's 29 governorates.

Truckers launched their strike action in response to plans by the Finance Ministry to raise truck licensing fees and demands by the Transport Ministry that all semi-trailers be converted into full-trailers--at their owners’ expense--by August 2011.

While the Finance Ministry now claims it has revoked its decision to raise licensing fees, the Transport Ministry, for its part, does not appear to be backing down on its demands.

Truckers, however, are not the only ones in the transport sector to be waging a strike. Owners and drivers of Egypt's micro-buses, too, are similarly protesting the imposition of new taxes. While not as organized or effective as the nation’s truck drivers, Egypt's micro-bus owners and drivers may well maintain their sporadic strikes into next year.

Strikes have even spread to some sectors that had no prior experience of labor unrest, such as a workers' strike at the American University in Cairo in October, in which some 150 university workers demanded pay raises and paid weekends.

Other notable incidents of labor unrest this year included strikes, sit-ins and sleep-ins conducted by some 32,000 employees of Information Decision Support Centers, which are affiliated to the Local Development Ministry. Hundreds of center employees staged sleep-in protests outside the parliament building in the first half of 2010 to demand that their monthly wages be raised from LE99 (about US$18) to LE149 (about US$27).

In his opening speech before the NDP’s annual party congress on Saturday, Mubarak made no specific reference to labor issues, focusing instead on the party’s vows to improve conditions faced by the nation’s farmers.

Amid skyrocketing inflation and rising unemployment, continued labor unrest remains entirely likely. The only uncertainty is how the regime will react as it tries to maintain stability in the run-up to the looming presidential contest.
Posted by Jano Charbel at 1:08 PM