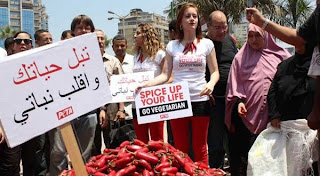 CAIRO: A fistfight between two women broke out in Mohandessin Sunday, after two-dozen Egyptians scrambled to collect free vegetables given away by an animal rights group.

Two activists from the People for the Ethical Treatment of Animals (PETA) group distributed free chili peppers near Moustafa Mahmoud Square to promote vegetarianism, in an event billed “Spice Up Your Life, Go Vegetarian.”

Female representatives from the American-run organization, wearing short-skirts and red leggings, distributed pamphlets in Arabic and English, which said that eating meat can lead to “environmental destruction, cruelty to animals, health risks, and poverty.”

Ashley Fruno, a Canadian employee of the Asia-Pacific branch of PETA, said the event was meant to be “a sexy and funny way to promote a serious subject.”

The onlookers, many of whom seemed more interested in free chilies, eventually dashed to fill their bags from a large pile of peppers PETA had placed on the ground.

The rush for chilies led to the scuffle between the two women, one of whom was knocked to the ground while both had their headscarves pulled off, angering several onlookers.

“It is shameful that they put food on the ground for us, as if we were animals. They are disrespecting Egyptians,” screamed one man, who only went by the name Mahmoud.

Imported red chili peppers sell for LE 7-10 per kilogram on average in Cairo.

Mohamed Hassan, 32, gathered three crates of peppers to use for cooking in his small street-side restaurant.

“Of course, I will not stop eating meat, however expensive it may be,” said Hassan. “But now I have a whole lot of peppers, which should last me at least three days.”

Despite the fight, PETA said they achieved what they had come for.

“We are used to getting negative reaction from some people,” said Nadia Montasser, a local PETA media representative. “As long as we get the message out, it's a success.”
Posted by Jano Charbel at 8:31 AM

Check out this video PETA made: http://meat.org