In Egypt, a backlash against sexual harassment

In Egypt, a backlash against harassment 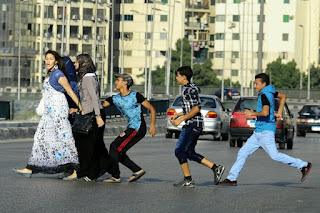 
Cairo — The 19-year-old deliveryman on the motorcycle slowed down as he approached her, Dina Emad said, then groped her as he swerved around her on the crowded Cairo street corner.

It was just another instance of what many people in Egypt say is a growing problem: harassment and assaults of women that range from ever-present catcalls to much more brutal incidents. But more people are trying to do something about the issue, discussion of which has long been taboo in this conservative Muslim society.

Some Egyptians worry that reporting assaults could hurt their marriageability in a country where most women cover their hair to protect their modesty. Emad, 22, is one of just a few women in Egypt who have pursued harassment charges against an assailant, a process that requires a lengthy investigation and several courtroom appearances.

When the groping occurred earlier this summer, she said, many bystanders at the scene urged her to let the man go, she said. But Emad said that if she didn’t do anything, the problem would only get worse.

Bringing it into the open hadn’t been easy, she said. “I’m single, so I was worried that it would be a black mark for when I get married,” she said.

Since the street protests that toppled President Hosni Mubarak in February 2011, many Egyptians have complained that day-to-day security has been worse, a byproduct of the reduced presence of a police force that used to serve as the enforcers of the old regime. On Cairo’s packed, rumbling subways, men sometimes clamber into the train cars reserved for women. In the bustling downtown, groups of young boys have pursued women through the streets.

Now, citizens are taking matters into their own hands. Efforts in recent weeks have won praise from advocates for women’s rights, who say that the biggest step in fighting the problem is talking about it.

One recent day, two dozen volunteers fanned over the sidewalk in front of a mall in Nasr City, a middle-class district in Cairo. Amid honking horns and the crisp smell of roasting corn from street venders, they stopped pedestrians to ask them about harassment.

“What do you do if someone harasses you?” Noha Yousry, a 32-year-old teacher, asked three girls who were wearing head scarves.

“We’re quiet, and then we leave,” one of the girls said.

“There are young boys who really bug you and touch people,” said another. 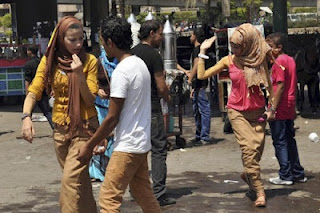 But others with whom the volunteers talked had different ideas.

“Have you ever seen someone harassing a woman who is wearing a face veil?” said Ahmed Farouk, 35, who works at an advertising agency. “Society is developing for the worse, not just the way girls dress, but also manners and behavior more generally.” But he said that harassment is a problem.
In fact, many women say that those who wear the niqab — the head-to-toe black garment that leaves only a slit for the eyes — are subject to the same whistles and grabs.

“This is a silent crime. But now more women are talking about it,” said Nehad Abul Komsan, the head of the Egyptian Center for Women’s Rights, who in 2010 oversaw a study that found that 83 percent of Egyptian women said they had been harassed, almost half of them daily. An online project called HarassMap documents where problems happen in Cairo and shows incidents across the city, from the richest to the poorest neighborhoods, at all times of day.

Advocates are still trying to assess where Egyptian President Mohamed Morsi stands on women’s rights, but some are worried. Morsi, who has been in office a little more than two months, is a member of the Muslim Brotherhood. He has yet to fulfill a campaign promise to name a woman as vice president. Only three women were among the team of 21 aides and advisers named by Morsi last month; two of 35 cabinet members are women.

“This government does not see women as a priority,” Komsan said.

Others worry that policy changes, when they happen, will be concentrated only on helping ease the way to a more conservative society. Last week, a female news announcer on state television wore a head scarf for the first time in the history of the organization.

The move won praise, because having presenters cover their hair allows them to reflect society more broadly. Still, some women’s advocates fear that measures that ensure other liberties, such as family law that gives more rights to women, will be passed over in the constitution that is being written.

Where the government has failed to step up to combat harassment, new groups are trying to fill the gap by confronting harassers directly. During the Eid festival that marked the end of Ramadan last month, volunteers headed to crowded subway stations dressed in reflective yellow vests that gave them a hint of officialdom.

When they saw men riding on the women’s-only cars — which were instituted to protect women from harassment in the first place — they ushered the men off and pushed them toward a nearby police officer. In other instances, they protected women who said they had been grabbed or touched.

Over three days, they encountered 20 cases of harassment, said Nihal Saad Zaghloul, 26, one of the organizers.

“If 10 guys are going to the movies somewhere downtown, and there are just a few women around,’’ Zaghloul said, the men “know they can get away with it.”

But the enforcers’ work appeared to draw a quick response. Last week, Cairo’s subway system instituted a new harassment hotline that promises to dispatch a police officer at the next station in case of problems. Zaghloul hopes it works.


“We have laws,” she said, “but they will never be applied if society blames the woman.”

*Haitham Tabei and Ingy Hassieb contributed to this report.
Posted by Jano Charbel at 8:00 PM

So, covering women doesn't stop harrasment, sexual abuse or even rape! In this case why are you covering yourself?