Who Speaks for Egypt's Workers?

Who speaks for Egypt's workers? 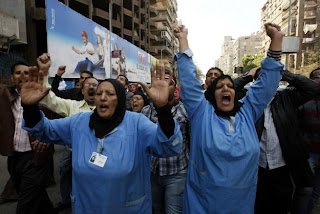 Egypt's January 25, 2011 revolution gave the country's workers a golden opportunity to press their agenda. Workers played a key role in the wave of societal unrest that led to Hosni Mubarak's downfall, and after the long-time president's departure many restrictions on political organization and dissent were relaxed.

But workers have not been able to seize that opportunity to cohesively advance their demands. Instead, fragmentation has emerged as the dominant feature of post-Mubarak labor politics. Egyptian workers have struggled to find their own voice as they navigate the legacy of state control over labor organizations and a complicated new political situation.

In the years preceding the revolution and in the lead-up to Mubarak's ousting, Egyptian workers demonstrated their willingness to pioneer new forms of collective action, take risks to engage in collective action, and push the boundaries of their relationship to the state.

Workers have become even more emboldened in the post-Mubarak period. Egypt's political leadership will thus need to take workers' concerns seriously if it is to avoid continued social and political unrest. One of the key questions for Egypt's transition is precisely what system will be used to regulate workers' representation.

On the eve of the Egyptian revolution, the Egyptian Trade Union Federation (ETUF) was the country's sole trade union federation. ETUF's leadership was increasingly seen as loyal to the Mubarak regime and unwilling to defend workers' interests. In the five years preceding the removal of Mubarak, Egypt witnessed the largest wave of workers' protests since WWII.

These strikes and protests occurred largely outside the framework of the ETUF. According to some estimates, over 2 million workers engaged in more than 2,100 strikes and other forms of protest from 2006 to 2009. There were at least 530 labor-related incidents including strikes, sit-ins, and demonstrations in 2010 alone.

On January 30, 2011, in the midst of the 18-day uprising that toppled Mubarak, a group of four "independent unions" announced the establishment of the Egyptian Federation of Independent Trade Unions (EFITU). Today, EFITU boasts a membership of 281 unions and more than 2 million workers.

The contest over workers' representation has only intensified in the 19 months since Mubarak's ousting. All of Egypt's trade union organizations are in a state of legal limbo. In the absence of any clear legal framework, for the first time since 1957 three major labor confederations are competing over the representation of Egyptian workers and recognition by the country's political leadership.

This is only complicated by the electoral political ascendency of the Muslim Brotherhood (MB) given the organization's potential to try to improve its political standing within the labor scene and its
pragmatic views, which conflict with those of other independent activists.

Egypt's labor organizations have been forced to operate in a legal vacuum since the revolution. The ETUF has been rocked by a series of court rulings invalidating previous elections results.

In August 2011, the government of Essam Sharaf, Egypt's first post-Mubarak prime minister, enacted a ruling by the Supreme Administrative Court invalidating the election results of the 2006 round of ETUF elections, thereby mandating the dissolution of its board.

A subsequent ruling by the Supreme Constitutional Court (SCC) in April invalidated the results of both the 2001 and 2006 rounds of ETUF elections on the basis that they were held without judicial supervision.

New ETUF elections are thus in order, but such elections have been postponed twice (they are currently scheduled for November). In the meantime, the organization and its various unions continue to be run, for the most part, by the same leadership elected in 2006. Reform-oriented activists hope that new elections will be held under new rules but a revised unions' law has yet to be issued.

The old leadership of the ETUF will not easily let go of its status. It has control over enormous assets, including real estate, which creates high stakes for those threatened by reform.

Skeptics, primarily in the EFITU and the Egyptian Democratic Labor Congress (EDLC), claim that the ETUF's endemic corruption necessitates a complete overhaul of the organization.

Reformists, including MB unionists and activists within the well-endowed industrial unions of the ETUF, insist that overhauling the organization would squander valuable resources, while skeptics fear continued siphoning of workers' resources.

Given the high stakes involved, it is likely that old ETUF leaders will fight hard to retain their privileged positions.


The plethora of "independent unions" formed since February 2011 stand on even more tenuous legal foundations. Independent labor activists refer to two primary documents to demonstrate the legal credentials of newly formed unions: the March 30 constitutional declaration issued by the Supreme Council of the Armed Forces (SCAF), article four of which gives citizens the right to form associations and establish unions and federations; and a statement confirming union freedoms released by former Minister of Manpower Ahmed al-Borei.

They also reference that Egypt is signatory to international agreements which stipulate workers' rights to form their own unions. But despite those referents, the legal basis of these new unions remains contested.

To resolve these problems a new trade unions law is imperative, but it is not clear when it will be issued or whose version will be used. As of yet, trade union affairs in Egypt remain governed by Law no. 35 of 1976, which almost all activists agree needs to be revised to expand trade union freedoms.

Given the dissolution of Egypt's people's assembly in June, however, it is not clear when a new law will be issued. In addition, there are several competing visions regarding the precise regulations on union formation with four draft laws in circulation before parliament's dissolution.

While most agree on expanding union freedoms, the devil is in the details -- especially when it comes to trade union pluralism. The draft law circulated by Muslim Brotherhood members of parliament would prohibit the establishment of more than one union committee per enterprise, a stipulation that independent labor activists -- in the EFITU and EDLC -- view as threatening to their understanding of trade union pluralism as ensuring the possibility of establishing multiple union committees per enterprise.

This situation means that for the first time since 1957, three major labor organizations are competing over the representation of Egyptian workers and over the establishment of new rules governing their interaction with the state.

The ETUF, EFITU, and the EDLC are all striving to attract new members or, at the very least, not lose their members to the other two organizations. The ETUF, for instance, has recently declared its willingness to incorporate some of the newly formed "independent unions" into its fold.

Although industrial unions remain mostly under the purview of the ETUF, the EFITU and the EDLC have been successful in attracting civil servants and previously non-unionized workers in the private sector.

Workers in the state-owned industrial sectors have huge financial incentives to remain under the ETUF given that their membership dues are legally tied to social security funds. In addition, many activists in those sectors believe that free elections held under new regulations might resolve many of their concerns, especially regarding corrupt union leaderships.

Those calculations might change, however, depending on amendments to the trade unions' law.

To date, newly-elected president Mohamed Morsi has only met with representatives of the ETUF, promising to establish more channels of communication between the presidency and the ETUF.

The EFITU and the EDLC have critiqued Morsi's failure to invite them to participate in such dialogues, asserting that the ETUF is no longer the sole representative of Egyptian workers. The EFITU and EDLC have also questioned ETUF President Ahmed Abdul Zahir's capacity to keep his promise to Morsi to put an end to workers' protests for a year, claiming that he cannot speak on behalf of all Egyptian workers.

An animated "war of statements" between the ETUF and the EFITU followed the president's meeting with the ETUF as the two sides exchanged accusations of illegitimacy.

Conversely, the EDLC -- technically not a trade union federation but a coalition of labor unions -- prefers a more gradualist and bottom-up approach toward organization building. This entails slowly building up membership rather than endorsing a "power in numbers" approach. According to the EDLC, this strategy ensures that nascent trade unions receive proper training that would serve as a strong foundation for future organization building.

Finally, the Muslim Brotherhood's political ascendancy has alarmed ETUF leaders as well as independent labor organizations. Morsi's victory in May's presidential elections and the recent appointment of Freedom and Justice Party member Khaled al-Azhari (and member of committee overseeing the affairs of the ETUF) as minister of manpower have raised suspicions over the Brotherhood's potential to dominate labor affairs in Egypt.

Independent labor activists worry that Azhari will use his position to advance the MB's version of the trade unions' law, which they perceive as far too restrictive. EFITU President Kamal Abu Eita has also called on Azhari to resign from his position in the ETUF and the constituent assembly on claiming that he is no longer a representative of the workers in his new capacity as a cabinet member.

More generally, EFITU and EDLC unionists are more skeptical of ETUF reform prospects than their MB counterparts. ETUF leaders, for their part, fear the politicization of the organization, especially given the presence of a few MB unionists in some top leadership positions.

In a recent incident, MB unionists were accused of booing SCC Judge Tahni al-Gibali off the stage at a conference about workers' demands from the president, held in July. Following the incident, there were reports that the ETUF board would be reshuffled to allow for the removal of MB members.

It is unclear how well MB unionists would fair in free ETUF elections. Given the strength of the MB's electoral machine, however, it is possible for the MB to employ this machine to garner more support within the ETUF.

The MB's pragmatic approach to politics is mirrored in its approach toward workers' affairs. MB unionists within the ETUF as well as in professional syndicates believe that "reforming from within" is the best strategy at this point. Not only does this prevent the squandering of existing assets, it saves the organization the trouble to cultivate bases from scratch among already unionized-workers, a required step for entirely new unions.

As Egyptians work to craft a new political system, workers are not only struggling over who speaks for them but also whether they will have a voice in Egypt's new political system. The latter goal is only made more difficult by their current fragmentation.

In the absence of a united leadership or a political party to represent their interests, Egyptian workers run the risk of being unable to press their most important political and economic demands -- namely the maintenance of a quota for workers' representation in parliament, the institution of a maximum and minimum wage in public sector jobs, the removal of corrupt management, and better working conditions.